William A. Noguera pen’s what critic’s have hailed as a raw and visceral, yet highly crafted and finely detailed memoir of life on death row at San Quentin prison. The nation’s largest and deadliest condemned population, where men’s hearts grow black with hatred and plot against you with one goal in mind: to murder you.

This is also a story of redemption, told through a stunningly clear lens of what it’s like to grow up in an environment of fear, racism, violence, and crime.

A beautifully written tale of transformation that reminds us that our worst deeds don’t define who we truly are.

SHOP NOW
"Fascinating and frequently shocking memoir of life behind the walls of San Quentin prison. Noguera writes candidly and unrelentingly. A provocative and sure to be controversial portrayal of repentance through art."
-Kirkus Review
“The book is a chilling look through the eyes of a man who has nothing to lose in this life except going to his grave without being understood. Noguera is a gifted storyteller whose story is not only valuable, but must be told.”
-Forbes
...An inmate in a brutal, violent climate for more than 30 years and never formally trained as a painter or writer, [William A. Noguera] nonetheless produces expressive, award-winning art that is astonishing, as is the clarity and well-crafted technique of his literary voice.
-Bay Area News Group
Previous
Next

William A. Noguera is an award-winning artist, producer, and co-host of Death Row Diaries true-crime podcast. He is also author of Escape Artist, Memoir of A Visionary Artist On Death Row. His first book, and is a leading expert in the field of behavioral science of Serial Killers, their traits, habits and methods. With over 35 years of experience and research to his name.
LEARN MORE 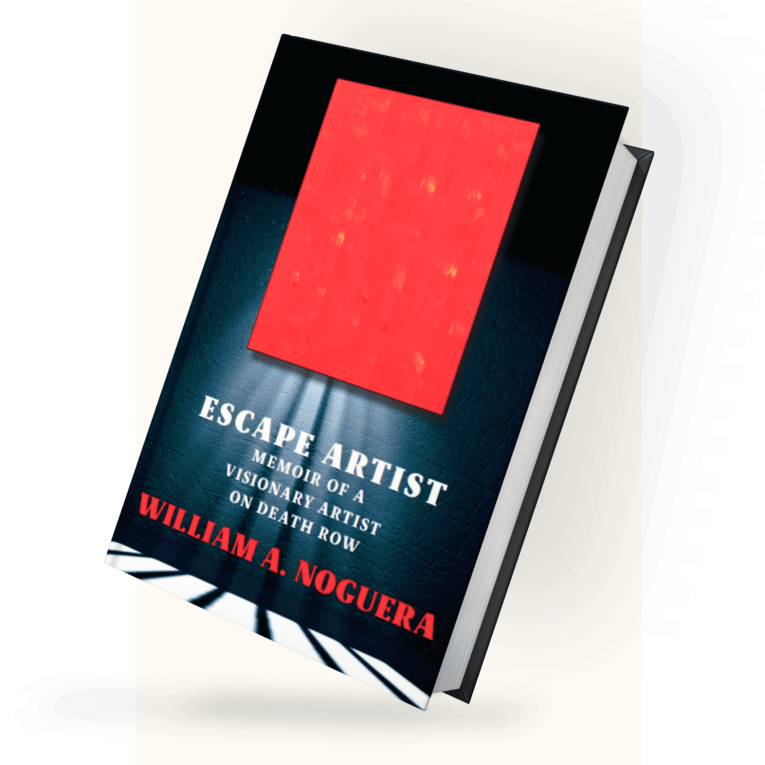 William A. Noguera has spent thirty-four years at the notorious San Quentin Prison, home to the nation’s largest and deadliest death row. Each day, men plot against you and your life rests on a razor’s edge. In Escape Artist, he describes his personal growth as a man and artist and shares his insights into daily life and the fight to survive in the underworld of prison culture.

After being sentenced to death, he arrived at San Quentin Prison and was thrown into a rat-infested cell—it was there that he discovered the key to his escape: art. Over the next three decades, Noguera rebelled against conventional prison behavior, and instead forged the code he lives by today—accepting responsibility for his actions, and a self-imposed discipline of rehabilitation. In the process, he has explored his capacity to bring focus and clarity to his artistic vision.

Escape Artist exposes the violence, politics and everyday existence within the underbelly of society that is prison life. In an unprecedented narrative, Noguera reveals the emotional and heart-wrenching loss that landed him on death row and the journey he has taken to become an award-winning artist, speaker, and author—a tale of one man’s transformation through tragedy.

“Escape Artist is a gripping, sad, inspirational, and amazing story of being on death row on America’s worst prison.”

“This Memoir is rich with sincere storytelling. It is inspiring to know that even in a harsh and unforgiving place like prison. It is possible to produce such a creative expression. Readers will find that Noguera is not only an award-winning artist, but a model of compassion and generosity”

“Raw and visceral yet highly crafted and finely detailed. Influences on the writing style could be compared to the Shaka Senghor autobiography with a temporal retracing of causality and response that is both engaging and interactive.”

“The book is a chilling look through his eyes with nothing to lose in this life except going to his grave without being understood. Noguera is a gifted storyteller whose story is not only valuable, but must be told.

Each chapter catapults readers through his teen years into his life in prison, leading to the deeper meaning he discovered within himself, his rehabilitation and the importance of sharing this ascension to help others.

Noguera’s story is one of reflection, discipline, creativity and, above all, hope.” Ben Trefney of Cross Currents interviews William A. Noguera about his life, his art and his new book Escape Artist.

These works in pen and ink stippling were first in

Series: WHEN MOUNTAINS CRUMBLE TO THE SEA, UNTITLE

Series: WHEN MOUNTAINS CRUMBLE TO THE SEA, UNTITLE